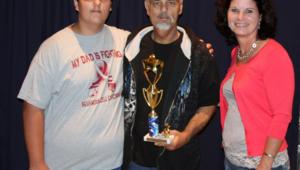 Billy Lawson, Jr. of North Judson was awarded a special trophy, Most Passionate Participant, from the South Shore Convention and Visitors Authority for his enthusiastic participation in the South Shore Regional Car Show, which was hosted at Fair Oaks Farms on July 10.

Lawson brought his red, white and blue 1983 Monte Carlo, a car that he races at Medaryville's Shadyhill Speedway every weekend, to the inaugural show. He was accompanied by his 16-year-old son and racing partner, Billy Lawson III, as well as other family members.

"I happened to run across one of your (the South Shore CVA's) flyers for the car show and thought it sounded like something I could do with my son and family. I had an amazing time being there and having my family there with us," he said.

Lawson was diagnosed with squamous cell carcinoma last October. He started chemotherapy and radiation on his birthday in November. The cancer attacking his neck and throat has restricted his ability to eat normally, causing Lawson to lose more than 150 pounds over the past nine months.

Throughout this difficult time in his life, Lawson strives to teach his son some important life lessons. Billy said that his dad has taught him to be consistent, to keep fighting and to never give up.

"I decided not to let the cancer get to me and got back into something I have always loved to do," said Lawson.

He pulled his old race car out of storage, where it had sat for more than 10 years. He bought a car for his son, rebuilt and painted it red, white and blue to match his own car as a "great tribute to our country." The two started racing together this past summer and race at Shadyhill every Saturday.

"I continue to work every day. I refuse to go on disability. Working and racing keeps my mind off the cancer," said Lawson. "Doctors keep saying not long, but I fight to prove them wrong." And fight he does.

He is currently second in the standings at Shadyhill in the UMP Stockcar division - and gaining on first place.

The South Shore Regional Car Show was the first car show the two had done in years. Billy's favorite part of the show was seeing all of the old pickups and watching the fireworks show. His dad's favorite part was being there with his son.

Lawson's car was one of 213 cars that were shown at the South Shore Regional Car Show. Registrants came from 51 different towns and cities in three states. Attendees enjoyed a wide variety of cars, several dragsters, an antique snowmobile display, vendors, a DJ and music, and a fireworks show.

For more information on the South Shore Convention and Visitors Authority and upcoming events, visit www.AlongtheSouthShore.com.