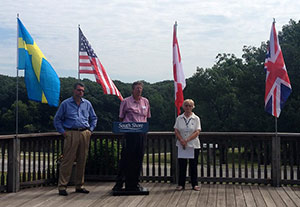 Crown Point, IN (July 15, 2013) - The Professional Disc Golf Association Pro World Championships will be played at Lemon Lake County Park and Hidden Lake Park Tuesday, Aug. 6, through Friday, Aug. 10. During a press conference on Monday, July 15, tournament planning officials and Speros Batistatos, president and CEO of the South Shore Convention and Visitors Authority, outlined the schedule for the 2013 PDGA Professional World Championships and the impact sporting events have on the South Shore.

Batistatos started the press conference by discussing the significance of professional and amateur sporting events hosted in the region. Through the South Shore CVA's housing system, over 500 room nights have been booked for the upcoming PDGA Professional World Championships. The South Shore CVA is estimating a $125,000 economic impact from the August event.

"This tournament is bringing upward of 400 of the best disc golfers from all over the world to the area," stated Brian Cummings, tournament director.

According to Cummings, the players will be participating in field events, best shot and alternate shot events and meetings on Saturday, Aug. 3, and Sunday, Aug. 4. Monday, Aug. 5, players will have an opportunity to practice the courses before beginning the tournament on Tuesday, Aug. 6. Disc golfers will be competing for $100,000 in prizes.

With the tournament, numerous special events are planned for players and the public. According to Lake County Parks Superintendent of Visitor Services Sandy Basala, the public will have many opportunities to get involved with the tournament and learn about disc golfing.

"Kicking off the special events on Saturday, July 27, we are offering a free clinic to learn the basics of disc golfing from a professional player," said Basala.

From 11:00 a.m. to noon on Saturday, July 27, the public will learn about disc golfing at Lemon Lake County Park. Professional disc golfers will demonstrate a variety of long shots, etiquette of the game, when to change discs and putting during the clinic. Visitors to Lemon Lake County Park must pay a gate fee of $5 per car in-county, or $8 per car out-of-county. Participation in the clinic is free.

"We really want to show that disc golfing can be played by anyone," started Basala, "The sport is family-oriented and brings people outdoors for a great source of exercise. It's also very inexpensive to play."

Additional special events include the Flymart and the PDGA Awards banquet at Radisson Hotel at Star Plaza. The Flymart will bring disc golf vendors to the Radisson for a free expo from 6:00 p.m. to 10:00 p.m. on Tuesday, Aug. 6. The public is encouraged to attend to learn about the sport and various products associated with the game.

On Thursday, Aug. 8, the PDGA Awards banquet will be held at Radisson Hotel at Star Plaza beginning at 6:30 p.m. From 8:00 p.m. to 9:00 p.m., there will be a PDGA award ceremony. Reservations for the dinner are required and cost $40 per ticket. Any public interested in attending may contact Sandy Basala at info@lakecountyparks.com.

Throughout the tournament and field events, the public is encouraged to come out to the parks and see the action. Admission to watch the tournament is $4 per person.