If you could put the month of July on your tongue it would taste like elephant ears, pork burgers and soft serve swirl ice cream. It smells like wood shavings and a smoky sweetness mixed with fresh cut grass. It sounds like the community band playing "John Phillip Sousa," the crow of a rooster and old friends laughing.

It's kids with faces scrubbed clean of the grime from a year's worth of work corralling and cajoling pigs and sheep. It's photography, woodworking and cake decorating and ceramic projects marched in proudly to the 4-H building by youth of all ages, exhausted parents trailing behind. It's outbidding the fair board president for a famous award-winning rhubarb pie in the Domestic Arts Building. It's a meandering midway, banked by tall somber oak trees and old friends that make a 10-minute walk stretch into a two-hour long promenade. It's watching carnival rides light up a star-filled country sky. 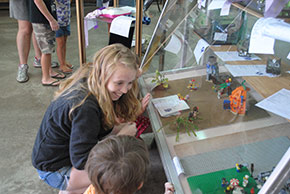 The Newton County Fair is a classic. While there are many wonderful county fairs in Northwest Indiana, not many are able to provide modern attractions with the vintage charm and friendly atmosphere of the Pun'kin Vine Fair. Just to be clear, that is not a typo. It's not "Pumpkin," it's "Pun'kin." The local slang and nickname for the fair is due to the original fair date in September, when pumpkin vines were growing over the entrance to the fair.

You can find pumpkin vines and pumpkins themselves intertwined throughout the fairgrounds. They're in the hanging baskets along the midway, sketches and drawings decorating some of the buildings, and there is also an entire category in the Domestic Arts confections and baked goods competition devoted to pumpkin-inspired recipes. My personal favorite is pumpkin cake, and also pumpkin cookies, and well the pie is really good too...ya know what, you're just going to have to view some of the concoctions for yourself! They're just too good for me to choose one.

The big attraction is always the concert, and if you're interested in some good music, food and a country sky, then get your tickets for Cole Swindell at 8 p.m. on Tuesday, July 14, 2015, in the grandstand. He's going to put on a great show. It's best to arrive before 6 p.m. and get your fill on fair food. The North Newton FFA stand features everything from great burgers, hotdogs and fries, and is right next to the grandstand. The Lions Club soft serve ice cream before or after the show is also a must. Don't wait too long though, or you will have to stand in a line 30 people deep.

I love the concert, but the truck pull on Wednesday, July 15, 2015, and the tractor pull on Thursday, July 16, 2015, (both starting at 7:30 p.m.) are the two favorites for my husband, and they usually serve as our fair date nights. Honestly, I hardly attended the truck and tractor pulls until we started dating, but I love them now. There's so much energy in the air when a big truck revs its engine and the crowd cheers. You hear the squeal of the tires as it takes off, trying to get as far as possible before the weight pulls it back. It's great to see how locals will fair against out-of-towners. The excitement from the audience is contagious.

Wednesday is always a juggling act because it's also Earth Night in the sheep arena for me. I'll be there encouraging youth and adults alike to reduce, reuse and recycle! Games, crafts, Sno Cones, popcorn and a Silly Safari animal show will be featured, and everything at Earth Night is absolutely free. When there's a break in the crowd, I dash down to Miss Piggy's for a pork burger and maybe some nachos.


The 4-H Council Pork Chop Supper and Community Band concert on Friday night, July 17, 2015, cannot be missed. If you do not get one of these delicious chops, then I have serious doubts about your sanity. I recommend walking off the pork chop supper by strolling through the 4-H and Domestic Arts Buildings. Friday night is a double bonus because quad and bike drag races, a new event, will be featured at the grandstand at 7:30 p.m.

The queen pageant is a staple on Monday night, July 13, 2015 with young women in evening and business attire gracing the grandstand stage. The pageant has a cult following with local family and friends decorating t-shirts and making up cheers for the girls they are supporting. I'll be there, but you won't see me in the grandstand. As former fair queen royalty, I'm recruited to help out behind the scenes, lacing up dresses, applying lipstick and providing those few last words of support. 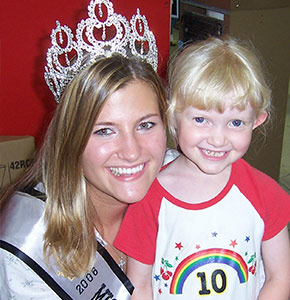 The Newton County Fair captivates old and new visitors alike. Many county fairs have gotten so large that some of the charm and nostalgia of classic fair attractions has been lost. The Pun'kin Vine Fair, with its tall oak trees and winding midway next to the Iroquois River, is like something out of a storybook.

I'm truly sentimental about the Newton County Pun'kin Vine Fair. My life would have been completely different without it. As a 10-year 4-H member, the fair was the pinnacle of my summers. I met my husband because of the fair. My title as Miss Newton County Fair Queen provided an excellent excuse for him to drive me in his Corvette for a parade, which also served as our first date. Six years after that first date, we had our wedding reception at the most fitting location - under the oak trees at the Newton County Pun'kin Vine Fair. 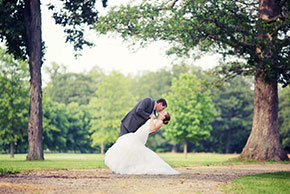 See you on the midway!

Sara DeYoung is a writer and environmental guru. After studying Environmental Science and Creative Writing at Purdue University she migrated to the city, but was lured back to rural Indiana by a rugged young farmer, and is living the life back home again in Newton County. She believes in a great cup of coffee. She loves to travel, read, and explore the great outdoors.

Read more from Sara on her blog www.SaratheWriter.com.