The Story of Painting "Indiana Dunes"

It was the end of my two-week artist residency at Indiana Dunes National Park and I had found the perfect location for the painting that would be the culmination of my time there.

It would be large so as to convey the majesty of the dunes.

It would pull the viewer in: to climb the steep slopes of the dunes, touch the pine branches, step over the delicate grasses, and feel the excitement of knowing the lake is behind the last dune.

The painting would focus on composition, emphasizing the triangular patterns created by the sand masses and the dark pine trees. I had it all worked out in my sketchbook. I was after simplicity, drama, and reverence.

It was a cool and comfortable morning, perfect conditions for the hike of about ½ mile from the car to the exposed platform with the view I had discovered.

I parked at West Beach, loaded my trusty sand cart (leaving my sun umbrella in the car) and hiked along the beach into the dunes on the Dune Succession Trail. After the challenge of pulling the cart through the soft sand, it was a relief when the trail turned into a boardwalk. The boardwalk led to the base of a wooden staircase that seemed to lead up to the sky.

A friendly park employee was repairing the steps and we exchanged some comments about the trail, the view, and his good fortune at working in such a beautiful spot. 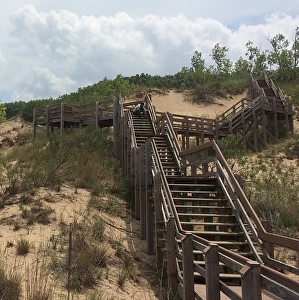 I left the cart at the bottom of the steps and carried my gear (in three trips) up to the platform, set up my easel and started to paint. After an hour, I had made a good start and already loved the painting. 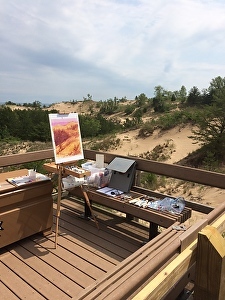 Then the sun came out.
The breeze stopped.
The temperatures climbed into the 90s.
And there was no shade.

By now it was 10:30 and steaming hot. The sun reflected off the sand and my lovely platform became a skillet on high heat. My sunscreen was blending with sweat and running into my eyes.

I tuned these things out and kept on painting, so focused that nothing else mattered, and having fun.

A hour later, I stopped to drink, and realized I needed to get out of the sun. Luckily there was a bench on the platform. 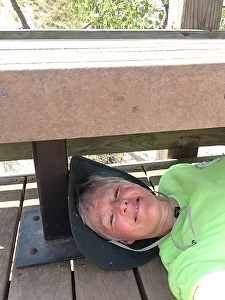 Around noon I headed back down the staircase, knowing there would be a few additional touches to add in the studio, but happy with the painting. 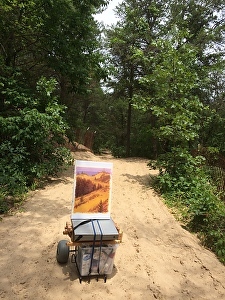 It was a long, hot morning, but worth it. I will never forget that little part of the dunes I had made my own.

I know the dunes now, not as well as Frank V. Dudley “the dunes painter” who painted them exquisitely, and for most of his life, but as well as a Pennsylvania artist could know them after two weeks of painting. 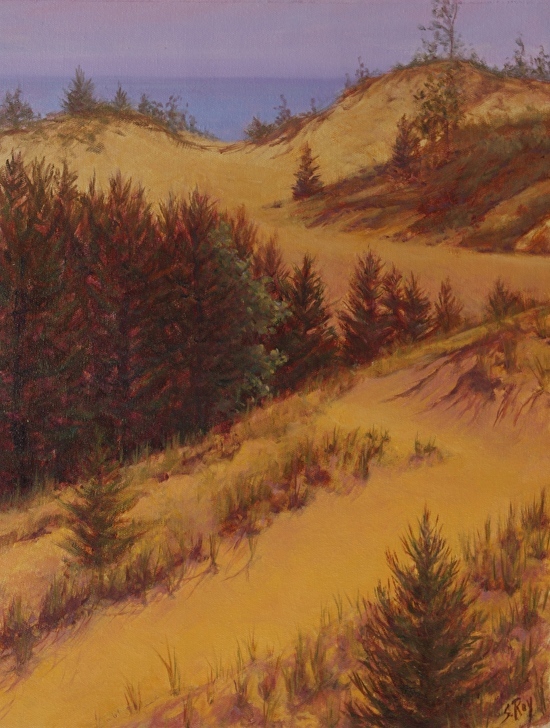 I hope "Indiana Dunes" will inspire others to protect and preserve the Indiana Dunes National Park and all of our national parks.

Simonne Roy is a professional artist who works primarily plein air, and lives in Central Pennsylvania. She was an artist-in-residence at Indiana Dunes National Park for two weeks during the summer of 2017. For more information about Simonne, visit www.simonneroy.com.